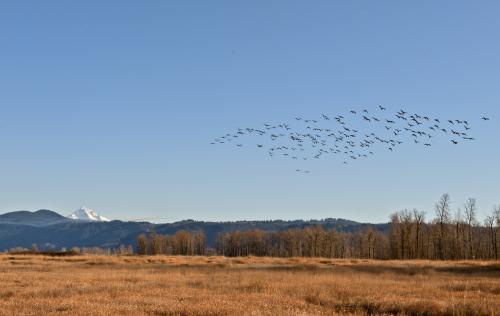 The Steigerwald Lake National Wildlife Refuge opened a 2.75-mile nature trail in June 2010, allowing visitors (and birders) the opportunity to walk along an accessible gravel walkway along willows, wetlands, cottonwood riparian forest, grasslands, and the Columbia River. The directions in this guide use the clearly marked mileage posts along the Lewis and Clark Highway (Highway 14).

This formerly seasonal floodplain lake, located on the eastern boundary of Washougal, is the southernmost spot in the state of Washington. With its location at the mouth of the Columbia Gorge and at the foot of the Cascade Mountain Range, it is a migratory crossroads. Birds following along the north-south along the foothills of the mountains and east-west through the nearly sea level break of the Columbia River through the Cascades may be encountered here. Over 200 species have been recorded on this 1,049-acre refuge, including Clark County rarities, such as, the:

The refuge offers Spring and Fall birding tours led by a Refuge volunteer naturalist. This is an excellent opportunity to sharpen your birding skills while enjoying Refuge trails and learning about the Refuge. All hikes start at the respective trail head. You can visit the Steigerwald Lake Wildlife Refuge website to learn the dates of the upcoming hikes and how to register for this interesting experience.