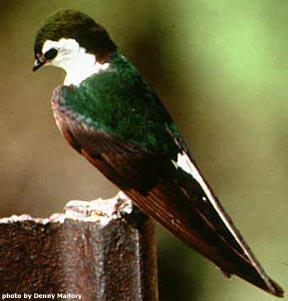 Swallows are streamlined birds that feed on flying insects that they catch while darting above open water, fields, and residential areas. Tree Swallows and Violet-green Swallows are the two of the six members of this diverse family that nest in Clark County that will readily accept a nest box in your yard. These birds closely resemble each other in size, being about five and a half inches in length and in color, which varies from dark greenish blue to green depending on the time of the year. The easiest way to tell them apart is that the only Violet-green Swallow has white extending above the eye and white flank patches that extend onto the rump.

The advantage of having these birds around your home is their nearly constant foraging for insects to eat and to feed their young. They will reduce the total number of insects that might affect your garden as well as helping control pests such as mosquitoes and biting flies. Early morning and evening is the time period when mosquitoes are most active and swallows begin to feed about an hour before sunrise and continue until dark. With West Nile Virus spreading across the nation the control of mosquitoes has become more important than just eliminating a nuisance.

In the wild, these birds nest in crevices in cliffs or in hollow trees but will use the eaves of buildings or any other available cavities. Both of these swallows use the same size nest boxes and return year after year to the same nesting sites, slowly forming colonies. In August, prior to migration hundreds of swallows of several species can be viewed when they gather on the power lines at the Washougal Wastewater Treatment Plant.

There used to be a forest of willow trees on private land South of the Washougal Wastewater Treatment Plant where hundreds of Tree Swallows nested. Unfortunately these trees were removed prior to the creation of the Steigerwald Lake National Wildlife Refuge. In an enlightened attempt to rebuild this colony and reduce the number of mosquitoes that affect their residents the City of Washougal allowed the placement of two-dozen nests attached to poles around the perimeter of the Washougal Wastewater Treatment Plant. These nest boxes, which are visible from Highway 14, are an indication of the City’s commitment to attracting eco-tourists while preserving the environment.

Blake Souders, who I mentored, received his Eagle Scout award for organizing and completing this task, used recycled wood along with materials donated by Lutz Hardware Do it Best. The nest boxes were mounted on recycled metal pipes provided by the Georgia-Pacific Camas Mill.