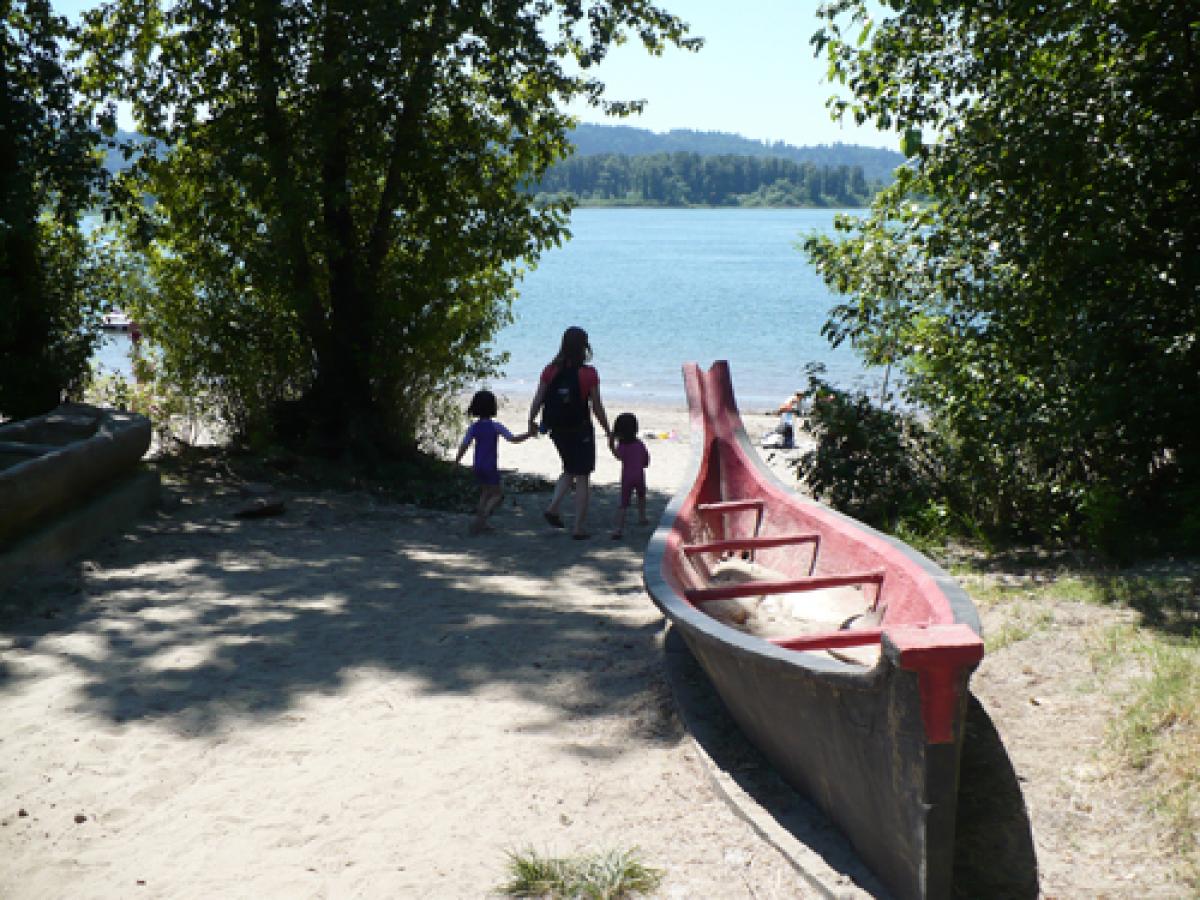 If you are a Lewis and Clark enthusiast, you will be excited to learn that a very strategic campsite along the Lewis and Clark Trail is located in Washougal, Washington. Furthermore, it is one of the few places where trail enthusiasts can walk along the Columbia River within close proximity to an actual Lewis and Clark campsite. Presently, the cities of Washougal and Camas, Port of Camas-Washougal, and the Clark County Parks Department are collaborating on creating a regional park at this location, and it has been named Captain William Clark Park at Cottonwood Beach. The National Parks Service recently awarded a grant to develop an interpretive theme for this site and local historians are planning to develop a replica provision camp near the actual campsite.

William Clark Regional Park is a joint venture between:

Lewis & Clark's Journey in the Area

When they reached a "handsome prairie" two miles up from the mouth of Seal River (Washougal River) and directly across from the upper Quicksand River (Sandy River), they bedded down with the same belief that it would only be an overnight camp. But the next morning they encountered entire families of Indians descending the river from the Cascade region who reported a scarcity of food east of the mountains. The Indians indicated that their supply of dried salmon had been consumed and the spring salmon had not yet returned, so they were in search of food in the fertile valley where the Sandy and Washougal rivers entered the Columbia.

The Corps of Discovery decided to camp as long as it would take to "put in a store of meat" in preparation for their return to what is now Idaho and the Nez Perce Indians. What was intended to be a one night camp turned into a six-day stay; between March 31 and April 6, 1806, the Corps of Discovery camped near present day Cottonwood Beach in Washougal. From this campsite, William Clark also led a group of men back down the Columbia to discover the Willamette River, which they had missed on both their outward and return voyages. Local Indians informed them of this large tributary and Clark was eager to include it on his map of the region. Apparently three small islands concealed its confluence and an Indian guide led William Clark and his party to its location. Clark briefly explored the mouth of the Willamette (which the Indians called Mult-no-mah), and then he returned to the base camp in Washougal after camping one night near present day St. John's, Oregon.

While Clark was exploring the local area, Meriwether Lewis supervised the drying of meat and the braiding of rope from elk hides with which the men would lift their heavy canoes over the falls when they reached the Columbia River Gorge. Lewis also took numerous celestial readings, made journal entries about habitat, animals, and insects; and took two plant samples from the Cottonwood Beach area. Furthermore, from his local exploration and discussions with Indians of the area, Clark was able to draw an accurate map of the region. Historians credit the campsite in Washougal as a key staging point for the Corps of Discovery's return to the east.

Washougal also had two other historic encounters worth mentioning. In October of 1792, the first Europeans to explore the Columbia River above its mouth were a crew of English seamen under Captain George Vancouver's orders. This crew was led by Lieutenant William Broughton. Vancouver learned about the discovery of the Columbia River from an American fur trader named Captain Robert Gray (from Boston). Gray discovered the river in May of 1792 while he was exploring fur trading enclaves on the West Coast.

The May discovery occurred at a time when the Columbia was running high from the spring thaw, so Gray had little difficulty in crossing its notorious bar. However, Vancouver arrived at the river's mouth in October, when the river is typically at its lowest level because the summer season normally melts the region's snow pack. Therefore, Vancouver could not get his large ship, Discovery, over the bar. He dispatched a smaller vessel to explore the mouth of the Columbia and directed Lieutenant William Broughton to explore its headwaters in a longboat.

Shortly thereafter, Vancouver left for Santa Cruz (California) where the two would later rendezvous. Broughton's crew rowed east as far as Reed Island near Washougal and then turned back after running out of provisions. Broughton assumed that the head waters of the Columbia originated at Mount Hood (a vista he named after an English admiral). Little did he know that the river actually drained more than 1,000 miles beyond this point.

Another explorer worth mentioning is David Thompson, who was commissioned by the Northwest Company to chart the Columbia River from its mouth to its headwaters. In 1811, five years after Lewis and Clark, he camped at the same "handsome prairie" at Cottonwood Beach near present-day Washougal on his exploration of the Columbia.