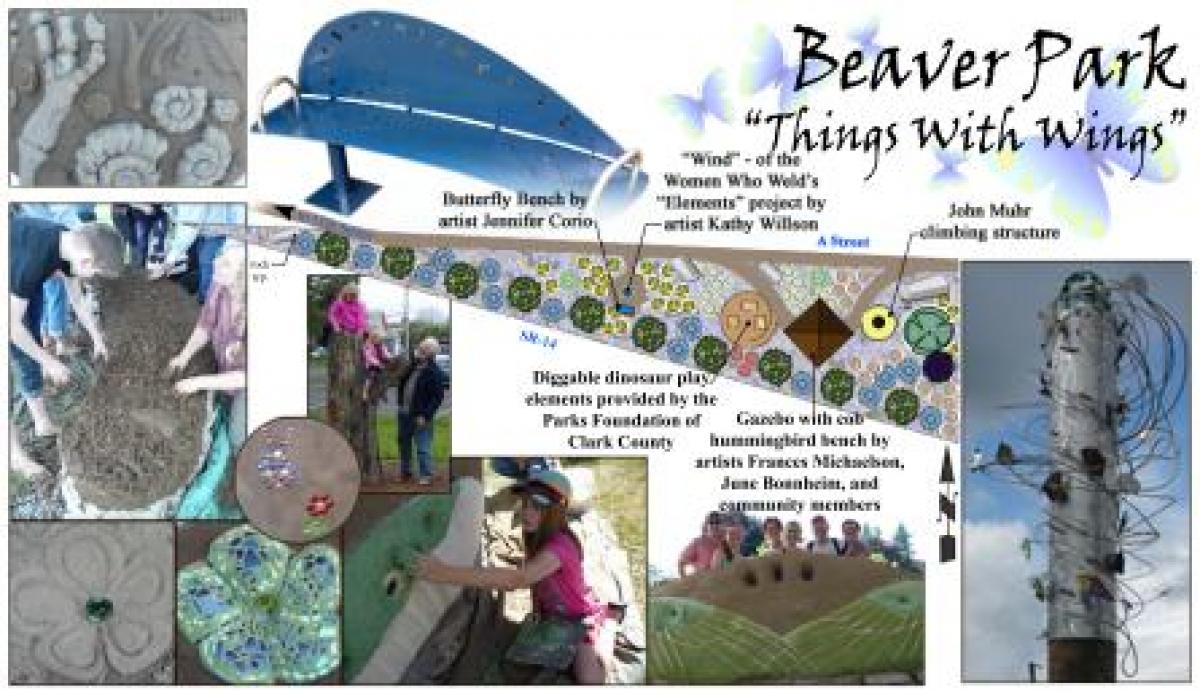 council member, Dick Beaver, with his own namesake park, located at 1200 “A” Street. Beaver Park held an actively used t-ball field until the 2003 construction of the Washougal Police Station pared the parkland down to .17 acres. Since then, Beaver Park offers very little recreational benefit to the community. The nearest playground for residents in this area is 3/4 miles away.

The family of Dick Beaver recently wished to donate a bench to the site; however, the Washougal Parks Department saw an opportunity for a plan that offers an educational opportunity for children and residents. The “Things With Wings” theme provides visitors information on attracting winged wildlife (pollinating bees, dragon flies, butterflies, song and humming birds, etc) into Pacific Northwest gardens with native flowering plants and habitat vegetation. Volunteers, a grant, and multiple cost saving opportunities continue to bring the “winged wildlife” display garden closer to completion.

Creating a special place that compliments Washougal and this neighborhood, also demonstrates appreciation for Mr. Beaver’s service to Washougal. Look for ways to contribute to this project over the next few years.

In the spring of 2010, the City of Washougal Parks Department received a $4,271 matching grant from the Parks Foundation of Clark County to develop an educational play element for Beaver Park. This intriguing piece includes the “raptor-dig” play feature, where children discover and unearth ancient winged creatures buried in sand. This opportunity provides a unique play experience for children to engage their imaginations, as if involved in an archaeological dig.

The Parks Department also relocated the John Muir climbing tree from Hathaway Park to this site. This feature compliments the park theme and adds another dimension of play for children. Learn more about John Muir.

Over the next few years, the Washougal Parks Department looks forward to integrating other non-traditional play features into the park that encourages imagination and captivates youngsters.

The Parks Department rearranged the large column rocks on site for kids to climb on and to act as solar bug warming/resting stations. Volunteers installed flowering plants to attract these flying creatures. The "off-site" mitigation for the nearby SR-14 Pedestrian Tunnel Project provided trees and shrubs for planting at Beaver Park.

The park is home to two special trees. A Thundercloud Plum Tree, was donated by the Camas/Washougal Garden Club and grows happily along the Eastern border of the property. Additionally, the Eddy’s White Wonder Dogwood was planted by Molly Coston in memory of her husband Phil Harris. Mr. Harris was an active participant in the community who enjoyed many years of working in the Two Rivers Heritage Museum.

More plants will be integrated into Beaver Park as the lawn shrinks away. The Parks Department hopes to replace grass blades with flowering perennials.

The City of Washougal constructed a 14 feet by 14 feet gazebo and with the assistance of several community members, built a cob bench with a hummingbird theme. Cob is an ancient construction method of mixing clay, sand, and straw and molding it into shapes. The structure is topped with a “plaster” that seals and protects. Often times, the plaster is mixed of different colors or inlayed with mosaics. See and enjoy this cob bench under the gazebo!

Wind metal art sculpture by Kathy Willson, is one of a series of four pieces by the Women Who Weld artist group. Wind was dedicated to the City of Washougal in 2015. Of the many contributors to this piece: The Richard Beaver Family, Virginia Frosh, and Shirley Scott contributed significantly.

The Butterfly Bench, by artist Jennifer Corio of Cobalt Studios, is situated for the visitor to sit and admire “Wind”.

The Washougal Parks Department continues to chip away at the plans for this little park. Features to be added in the future include constructing an interlocking brick floor in the gazebo, a “living roof” on the gazebo, a path throughout the site to connect the park features, community art murals to the gazebo posts, and continuing to replace the grass with flowering plants. The Washougal Parks Department hopes that visitors look to Beaver Park to enjoy the continuous development of public art, the colorful plant palate, and an expanding wildlife habitat.